The aim of The Nordic Short Film Pitch is to make short filmmakers from the Nordic countries meet, exchange experiences and find partners for potential future collaborations and co-productions. Simultaneously they meet international industry decision makers to expand their network.

Robin is an imaginative and resourceful 10 year old, but feels cornered by her parents crumbling marriage. Without any friends of her own, real nor imaginary, Robin flees into the woods and discovers a small Planet, which ends up following her home. To avoid her parents finding it, she hides it in the garage and ends up taking care of it there, providing all the things she thinks a planet needs. All of her “improvements” seem to be bad for the Planet though, and her actions have almost catastrophic results. Thankfully, she realizes before it’s too late and ends up taking the Planet back into the woods and setting it free. When the parents find Robin missing, a search and rescue mission ensues, and with that a sliver of hope for the small family.

A hand-drawn animated film about four groups of people who all live separate realities around a long table. Each group is unaware of the others and believes their side is the only reality. Until a few playing cards, a little bird, a rolling wine bottle and a girl’s curiosity lead to their worlds colliding. At that point the mysteries of this elusive world unravel, while the little girl playfully chases the bird. Chasing Birds is a farce with a poetic twist.

Núa burns through her last drops of gasoline to get to a peaceful pocket in nature at the end of the road, where a safe haven for powerhouses – musicians, artists, mystics and poets in various stages of meltdown, have gathered to recharge. She is a spontaneous filmmaker who’s life becomes a dizzying whirlwind of travels between Iceland where she is from and Berlin where she lives, when her first, surprisingly successful motion picture is released at the same time as her mother’s nervous system gives in.

Esther (28) knows what she wants and is constantly attempting to get that from her boyfriend Adam (29). Adam, who seems to withdraw as Esther moves closer, seems uninterested in having sex with her, although being loving and sweet. One morning, Esther discovers that Adam makes secret visits to a sex robot facility that specializes in elaborate sexual fantasies, designed after the customer’s desire, and with the slogan: “Artificial women never say no”. Esther goes to see the place for herself, but what she finds is far from settling; Adam has designed a robot that looks exactly like her. Desperate from the threat of being replaced Esther decides to be, what Adam seems to desire: compliant.

Agnes (33) and her former school bully, Jasmine (33), meet again when Jasmine’s daughter Wilhelmina (8) joins Agnes’ ballet class. Jasmine plays it as no bullying ever happened, but seems very uncomfortable leaving her child in the hands of her old schoolmate. Also Agnes is surprised about how powerful the encounter hits her and struggles with a desire for revenge. In the end it is Wilhelmina’s vulnerability and the absurdity of it all that make Agnes and Jasmine face each other.

The film is based on a small family living in the countryside. Joseph (27) and his sister Isa (23) and Joseph’s 7-year-old daughter Maya. In one of their rooms lies their father, Alan, who is only kept alive with the help of a machine. As Joseph sends his daughter Maya down to throw her dying fish into the sea, his father suddenly wakes up from his otherwise seemingly endless coma. But Joseph and his sister, Isa, must now relate to a man who is not the father they knew. Unable to speak and with a strange demeanour, it is clear that it is no longer their father behind the familiar face, but possibly Maya’s deceased fish. Will this revelation allow them to let go of their father or will the decision to make the final choice prove too great?

Arne Nyman will die and will be visited by the coroner Death. Arne manages to get deferred by Death to make one last drive to collect his debts. A road movie between a peasant farmer and Death in a Volvo 244 with the scythe fastened to the roof rack in the midnight sun starts. Arne’s last wish in life is to become debt free, Death gladly insists on helping him with this. A misunderstanding arises between Death and Arne. Instead of paying off his debts, this is about Arne seeing this as his last chance to recover his money. Debts his friends have in the form of old cinema visits and herring dishes.

Sara, 15, is forced to stay with her father at his house in the countryside as Sara’s mother is fed up with her diabolic behavior. Sara is reluctant because she doesn’t have a close relationship with her father. Father, Ilkka, is not accustomed to spend time with Sara and treats her with the same patronizing attitude as Sara’s mother and Sara is annoyed. Sara is about to run away. Ilkka understands to change his approach and gives Sara some space. Sara feels Ilkka accepts her and they find a way to be together.

Alexander has gathered all the guys from his childhood to show them a short film he created. The film depicts the talk at the bench in the project where they grew up. A jargon that kills dreams. Words created by project and macho norms.At first they don’t know the theme of the film. But slowly the jargon changes and becomes more aggressive. When it gets the most intense, they react. One of the guys gets an outburst, screams and cries because he realises what he has been a part of. They start talking about how they were treating each other as kids. Finally, in a circle of embrace and crying, they dare to meet.

This is Katharine (Hvem er Katharina?)

A personal short animation about freeing yourself from the stereotypes of society. We follow Katharine, who at a young age pounder over the fact that she might be a lesbian. Through an all-knowing voice over we hear her story, her thoughts and feelings, and we take part in her journey to find and to free herself. 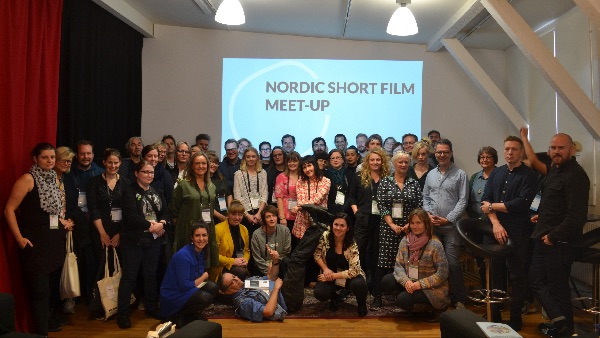