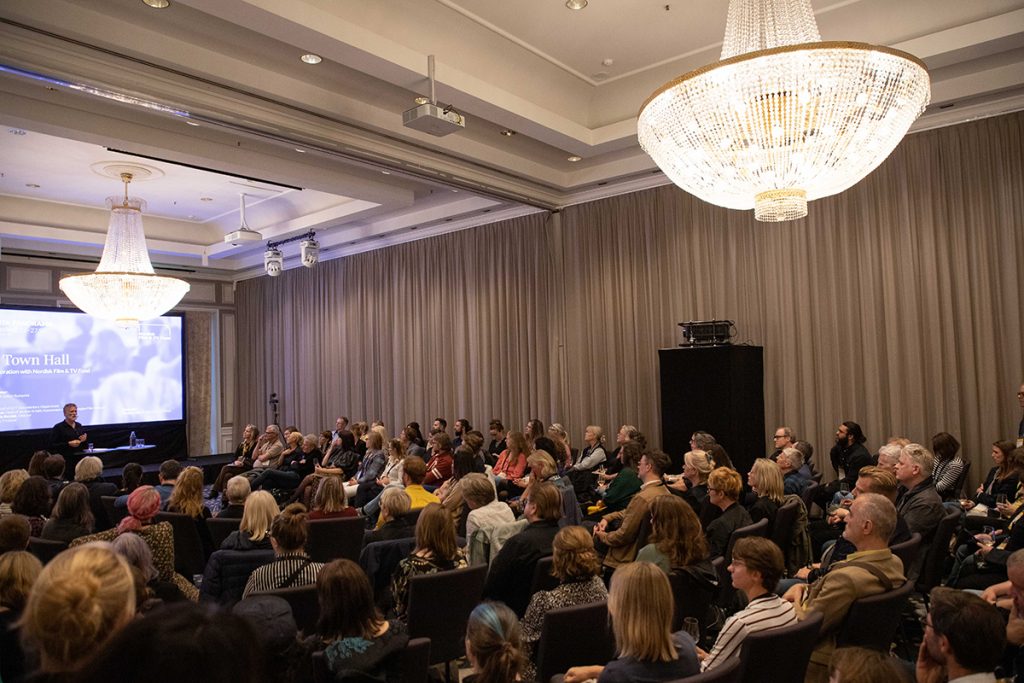 Documentary filmmakers are used to the fact that our world is unpredictable. Still, as the world looks today, we realize how dramatic and rapid things are moving, and it is relevant to ask ourselves, our filmmakers, our curators, decisionmakers and professionals in key positions when it comes to shaping the future possibilities for documentary filmmaking – Where are we going? Where do we want to be?

What will documentary filmmaking look like in a decade? What will be at stake and how is the industry bracing itself during uncertain times?

Those were some of the questions raised at the Town Hall in Malmö, September 25, organised by Nordisk Panorama in collaboration with Nordisk Film & TV Fond.

In a series of articles and interviews, Nordisk Film & TV Fond follow up on the discussions regarding the current and future state of the documentary sector in the Nordics:

Here’s the keynote by Kjetil Lismoen the editor of Norway’s trade publication Rushprint:

I am supposed to give you a pitch of the future. What will it look like in 10 years to come? What is going to be at stake?

Well, honourable festival leaders, you’ve given this assignment to a true dystopian.

I’m used to analysing movies into shreds, and finding åminus signs and meanings even the filmmakers never intended. So when I look towards the next ten years, all I can say is: Winter is coming. And I’m not thinking about gas prizes, although it might have something to do with it!

All over the world we see signs of suppression of free speech. A couple of weeks ago Hungary was finally diagnosed as an autocracy by the European Union. It is now formerly known as a democracy. Poland is not that far behind. And Turkey seems to be a lost cause. Recently, the watchdog for free speech, Muuse, reported that more filmmakers than ever face persecution all over the world. And especially documentary filmmakers.

In the aftermath of the pandemic autocratic rulers and dictators have tightened the screws. Iran has this summer gone through with extensive mass arrests and rounding up of filmmakers, included Firouzeh Khosrovani who recently attended Nordisk Panorama. And in Turkey and Russia thousands of journalists, teachers and filmmakers are jailed. What small nations like Slovakia have to deal with we can see in the documentary The Killing of a Journalist, which is screened at this festival.

In this repressive climate, the Nordic countries stands out as an island in the stream, in a kind of splendid isolation of transparency and democratic enlightenment.

This is at least what it looks like from a distance.

The other day I was having a beer with an old friend who used to be a film director. We began talking about the recent arrest of a Norwegian documentary filmmaker, Thomas Østbye. He was documenting an illegal occupation of an oil installation in Oslo, and got rounded up by the police. Suddenly my friend got quiet, and I knew what was coming.

During the 80s my friend made commercials for the oil industry, and he is still kind of remorseful. This is something one doesn’t talk about among filmmakers, because this was how many made a living between other more artistic endeavors. It was not at all considered the «comme il faut» that it is today.

My friend was never the Leni Riefenstahl of the oil business. Neither were anybody else. But like many others he sometimes made those oil installations look like Shangri-las of the future. And in some ways they were Shangri-las, and gave Norwegians a wealth that other Europeans today find quite unreal – especially these days.

More than any other artists, filmmakers have been instrumental in whitewashing the oil business. And some continue to do so: Just check out the latest commercial for the Norwegian oil company Equinor. They are celebrating what they hope is a comeback for the oil business.

The wealth from oil have been Norway’s dirty secret for a long time.

But we all have our own dirty secrets in the Nordic countries, don’t we.

Sweden’s dirty secret is not so secret anymore, after the last election. Where 20 percent of the electorate voted for the nationalist right-wing party, Sverigedemokraterna [Sweden Democrats)]

All I can say is, welcome to the club. The other Scandinavian countries have already had right wing populists in government, and we survived… sort of.

But on their part the Swedes now have to deal with a party with roots within the neo -Nazi-movement.

One of the challenges for the cultural sector is to give these right wing ministers a feeling of positive ownership of contemporary culture. One must make them forget their own populist threats to defund culture. It’s not impossible, at least not for the film business: Politicians like walking on red carpets. So you have to invite them.

But of course, none of the right-wing politicians become culture ministers, because they’re really not that interested – and culture is by far the smallest branch of the government. Politicians who seek real power don’t dream about becoming culture ministers

But if there is, let’s say, a Joseph Goebbels among them, it wouldn’t be that difficult for him to dominate the cultural sector in the Nordics. Because it’s totally dependent on the state.

I remember meeting a legendary American producer in Norway, where she was doing a workshop. She has produced hardcore arthouse films, but is also extremely business-minded, as you have to be. And she was a little astonished by meeting the Norwegian feature film community. She said: Nobody here seems to do much without asking the government for money or permission.

And it’s true: If the Nordic film institutes, tells us to jump, we will jump.

It is not difficult to foresee, in a more volatile political situation, how politicians in power can use these institutions as repressive tools.

In 2019 we got a certain taste of it in Norway, when the right-wing populist party in Oslo wanted to stop the funding of a local theatre. The theatre had just opened with the play Ways of seeing, where, among other things, photographs of the mansion of a prominent right-wing minister were being screened. The right-wing political establishment reacted harshly. Even the conservative prime minister, who hadn’t seen the play, went out of her way to criticise it. And the minister’s wife showed the newspapers how their house subsequently got vandalised after their location had been disclosed in the play. This was the moment when the right-wing party in Oslo called for a total defunding of the local theatre. They smelled blood.

But then the plot took a crazy turn. The police found out that the ministers’ wife probably had done the vandalising herself. And in the following trial she was found guilty of conspiracy.

You might have heard about it, it made headlines outside Norway, as well.

It could have been a major political crisis, a destructive polarising moment in Norwegian politics. That is, if the minister’s wife hadn’t done it herself and stolen the limelight. Instead, it became a personal tragedy, a kind of public farce, and is now going to be made into a TV-series.

We didn’t at the time have a Joseph Goebbels as culture minister. But I sometimes wonder what would have happened, if we had.

What if the play Ways of seeing was a documentary film? In Norway we don’t have the so-called ‘arm lengths distance’ between the cultural department and the Norwegian Film institute. The government controls the institute. The filmmaking community is really not protected from political interference.

In Sweden, you have at least made a report about free speech in the film community and the institute’s role. That is something which is sorely needed in Norway as well.

As I said, winter is coming.

We have all seen the grotesque scenes in Russia, where some of your colleagues makes a mockery of your profession every day on national television. They haven’t just occupied Ukrainian territory: They have even annexed Costa Gavras’ anti-authoritarian film classic with their perverted use of the letter Z. This shameless propaganda and its distortion of reality is nothing short of what the Nazi regime did in pre-war Germany. The spirit of Joseph Goebbels lives well in today’s Russia.

There has been a lot of debate about pressure on artists from identity politics and cancel culture, and it is a real problem. I sometime worry about the fact that young people today are too selective when it comes to free speech. But the greatest immediate threat is the rise of the far right in the west and its alliance with corrupted dictators like Putin and religious leaders and certain billionaires in the US.

These forces are about to make all the dystopian movies from the last fifty years come true in a way the filmmakers never thought were possible. The Handmaids Tale, Idiocracy, Don’t look up – soon these fictional scenarios can no longer keep up with reality.

Make no mistake: these people hate everything you stand for.

Because, you are obviously, a bunch of liberals, more often left wing than not. You portray life in all its contradictions, you disclose and make the power nervous. That’s your job – or, at least it’s my romantic view of it – and that is why I’m counting on you when the winter comes.

I’m not trusting the feature film community – they’re too dependent on the government and eager to please, they are always thinking about who can give them their next job. I’m not sure I would fight in the trenches with those guys. But I would fight alongside with you. Because you’re going to be at the forefront. You’re going to have to push back when the pressure mounts and the white walkers try to tear down the walls of the democracy. So you better be ready. 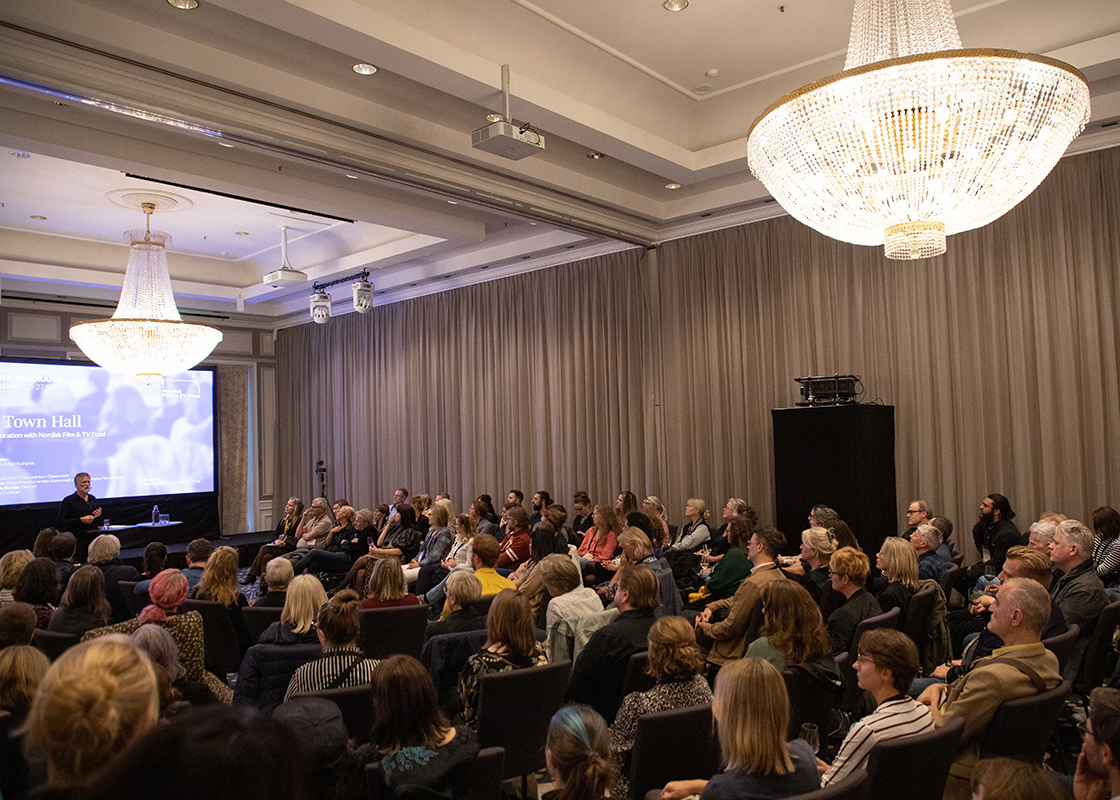