The 2022 Festival in Review

This year’s edition of Nordisk Panorama Film Festival became a major attraction for the local audience as well as for the Nordic documentary and short film community visiting Malmö for the festival. With sold out screenings, crowded seminars and industry events and activities all over town, it was clear to everyone what an importance the festival has as a meeting point for film lovers from near and far.

During the six days of the festival we screened over 100 documentaries and short films in more than 20 languages. The films were screened in more than 30 locations around town. 64 films were part of the competition programmes, competing for prizes in our five competition categories. A majority of the filmmakers were attending the festival to meet their audiences, in some cases for the very first time, and to share their experiences. The Forum and Market events were also bustling with activity with countless projects in different stages being presented and hundreds of meetings taking place.

If you think we’re exhausted after all this you’re absolutely right, but that doesn’t mean we aren’t already making new plans! The application for next year’s Doc Forward is open and the dates for next year’s festival are set to 21-26 September!

We would like to thank all of you who participated in this year’s festival! We really hope to see you in Malmö again next year!

Did you get an accreditation for this year’s festival? Remember that you can watch the competition programme online in our film catalogue until end of October!

Tuesday 27 September the winning films of Nordisk Panorama Film Festival 2022 were announced during the Award Gala at Malmö City Hall. Once again warm congratulations to all the winners!

364 film professionals attended the hybrid 29th edition of Nordisk Panorama Forum. 24 projects pitched to 78 decision-makers and a total of 46 projects were presented in the more than 650 one-to-one meetings. We are looking forward to following the projects, seeing the results and hopefully welcoming back the finished films at Nordisk Panorama Film Festival in the future!
57 producers attended the yearly networking event “Producers Meet Producers” focussed on co-production and sharing experiences. The day included a presentation by the Nordic Film Institutes and an introduction to our specially invited guests from the German delegation.

Nordisk Panorama Market was a busy networking hub with meetings, seminars and industry events, 249 films were featured in the market catalogue and 19 Nordic shorts and docs screened in the Closed Market Screenings. 12 projects were presented at The Nordic Short Film Pitch including a Baltic delegation arranged in collaboration with Baltic Pitching Forum. After the pitch 108 meetings were made, matching projects with decision makers.

What will documentary filmmaking look like in a decade? What will be at stake and how is the industry bracing itself during uncertain times?

Those were some of the questions raised at the Town Hall in Malmö, September 25, organised by Nordisk Panorama in collaboration with Nordisk Film & TV Fond.

In case you missed the strong keynote by Kjetil Lismoen you can read it here.

Also read in depth interviews with some of the participants here

In solidarity with Ukraine, Nordisk Panorama welcomed a delegation of producers to attend this year’s festival and take part in a special tailor-made industry programme.

The goal was for each of the Ukrainian projects to find a “home” with an experienced European production house, thus paving the way for collaborations, experience-sharing and co-productions in different countries. We’re very glad that we were able to provide this enriching opportunity for both the Nordic and Ukrainian film professionals.

The programme was developed in collaboration with the Ukrainian Institute and Sigrid Dyekjær with generous support from Newen Studios by Romain Bessi and Philippe Levasseur.

Read about the projects here.

Do you want to watch the digital version of the project presentations?
Contact: lea@nordiskpanorama.com

A Warm Thanks to All Our Collaborators

A warm thank you to out financiers and to all our international and local collaborators! We recognise your contribution to the Nordic documentary and short film community and to the local film loving audience in. We couldn’t have made the festival without you!

We’re very honoured to be nominated for Region Skåne’s Kulturpalett. The motivation reads “The festival succeeds in exploring new, creative ways of meeting its audiences. Through Nordisk Panorama Film Festival, which is based in Malmö, the organization has redefined the concept of space in a way that challenges our notions of what cultural spaces can be. During the pandemic, when people weren’t able to visit cinemas in the same extent as before, Nordisk Panorama chose to take film screenings to where the audience was. Among other things, the opening film was shown at three different locations in Skåne.”

We’re very excited about the nomination and of course also want to congratulate the other nominated organisations! The prize ceremony takes place at Region Skånes Rantafej 30 November in Eslöv.

Nordic shorts and docs are travelling and so are we! In the coming month you can meet Forum Manager Lena Nitsch at Uppsala Short Film Festival and Market Manager Maria Stoianova at Internationale Kurzfilmtage Winterthur. Both Maria and Impact & Workshop Manager Lea Sørensen will also be in Amsterdam attending IDFA. More than 20 Nordic filmsand projects will be presented at IDFA – check out the Nordic selection here.

Now is the time to send your application to the 2023 edition of the Doc Forward Talent Workshop. The workshop is aimed at new Nordic directors (max one previous feature documentary) teamed up with new or experienced producers. You can apply with a documentary or doc series in development or early production. The deadline to submit your project is Monday 7 November.

You find the evaluation form here! 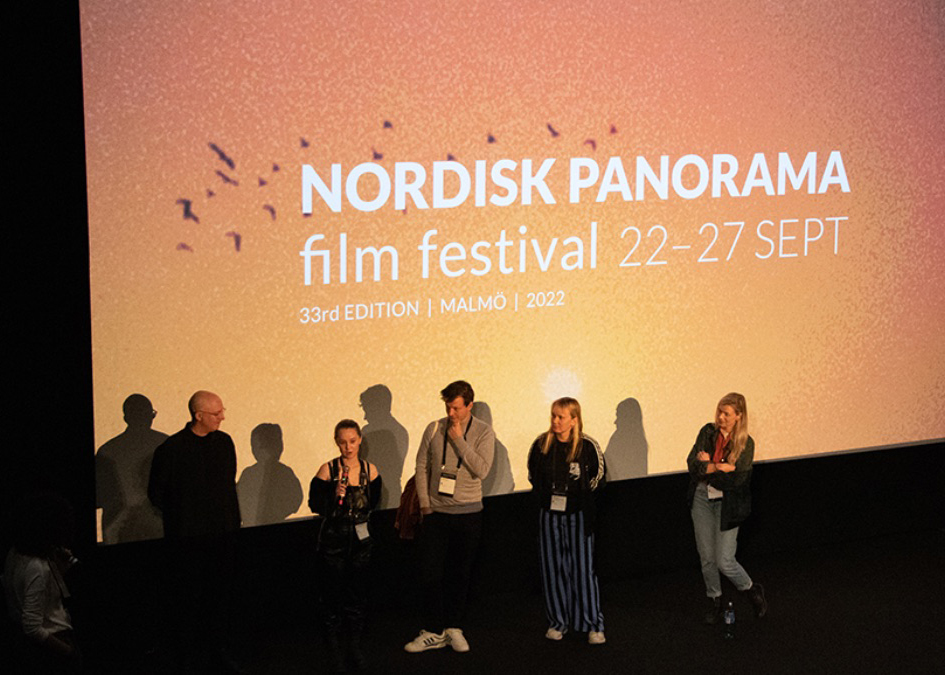